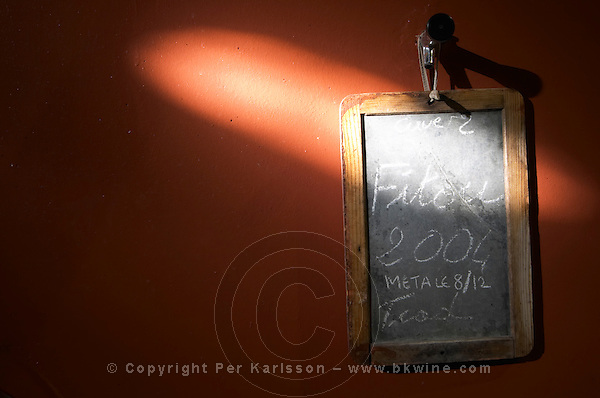 Fitou 2004, Cuve number 2. with notice of when it has been treated with sulphur. Domaine Bertrand-Berge In Paziols. Fitou. Languedoc. Painted steel vats. Concrete fermentation and storage vats. Sign on tank. France. Europe.

Domaine Bertrand-Berge, Fitou, Languedoc, France, stock photography samples, by Per Karlsson, BKWine — This is only a selection of samples. Use Image SEARCH to find more photos — Domaine Bertrand-Bergé is a wine estate in Fitou in the southernmost part of Languedoc, just on the border to the Roussillon in the south of France. The winery is in the small town of Paziols. It is owned by Jerome Bertrand and his wife who is also the winemaker sine 1994. Jerome is the sixth generation. The Fitou appellation is split in two parts: on that is inland and one that is close to the sea. Bertrand-Bergé is in the part of the region that is inland, close to the mountains. The vineyards cover some 33 hectares and are planted with the traditional Languedoc grape varieties: dominated by carignan and grenache but also with some syrah and minor quantities of other grape varieties. For the white wines: muscat and macabeu.

When Joerome took over the Domaine Bertrand-Bergé winery all grapes went to the co-operative. In fact 85% of the Fitou wines are made by the co-operative, so it was a big break with tradition to strike out on his own. domaine Bertrand-Berge has since climed up the ladder to become one of the most respected producers of wine in the Fitou appellation. The winery is very traditiona. Fermentation is mainly in concrete vats although some of the wines get a bit of aging in oak barrels. There is also a certain willingness to experiment with modern things – like producing a bag-in-box wine.

In addition to Fitou wines they also make Vin de Pays (“Le Meconnu”), Vin Doux Naturels (Rivesaltes of various types and Muscat de Rivesaltes), as well as a sweet late harvest wine called Tardive. (Due to the protectionist attitudes of other French wine regions they are not allowed to call it Vendange Tardive.)