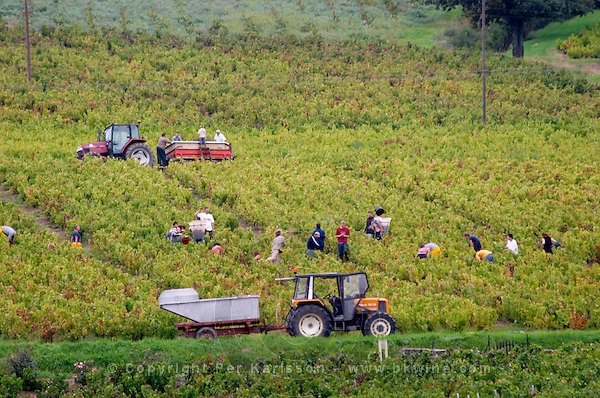 Beaujolais is the southern-most wine region in Burgundy in France. It is mainly producing red wines from the gamay grape, but it also makes some white wine using the chardonnay vine variety. The wines are generally fruity and aromatic. Most of it is drunk young, but the better qualities can be aged and then develop quite different taste and aroma profiles. Beaujolais is the largest sub-region in the Bourgogne wine country, covering some 20,000 hectares planted with vines.

The vines mostly grow on sandy or granitic soils. Traditionally vines have to be trained in the gobelet style (bush vines) and grapes must be harvested manually, quite different from what is practiced in other parts of Bourgogne. In recent years experimental plantings with vines trained on wire (cordon, guyot) have been allowed in Beaujolais to make it possible to harvest with machine. (However, there are vineyards that have been trained in cordon since long time back.)

The Beaujolais appellation is structured in the following levels: Beaujolais, Beaujolais Villages (better quality but without mention of the village, coming from 39 communes), and Beaujolais Cru. The top level is the “crus” (NB it is not called “grand cru”) which always mention name of the village (cru) on the label. The cru wines come from ten villages considered to be the best areas for wine growing in Beaujolais: Brouilly, Côte de Brouilly, Morgon, Moulin à Vent, Juliénas, Chénas, Saint Amour, Régnié, Chiroubles, Fleurie.