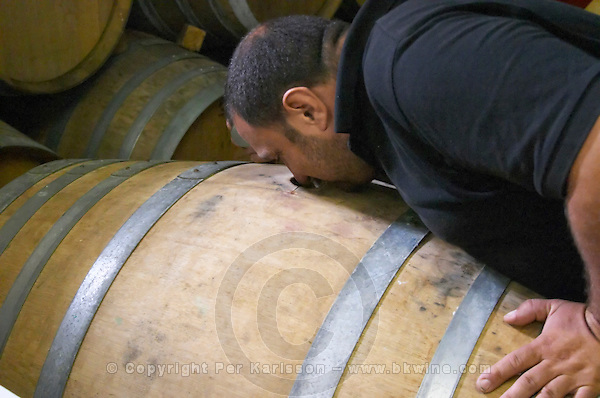 Domaine de la Garance, Languedoc, France, stock photography samples, by Per Karlsson, BKWine — This is only a selection of samples. Use Image SEARCH to find more photos — Domaine de la Garance is a wine estate not far from Caux in the Languedoc in the south of France. The owner is Pierre Quinonero, a solid rugby player-turned-winemaker. He has about 11 hectares of vines in vineyards all around the winery. His wines are dominated by carignan, which make up 90% of the plantings for the red wines. He also has some other grape varieties: grenache and syrah for the reds and ugni blanc and clairette for the white wines. The name of the winery comes from a flower that grows wild in the field here, la garance, the root of which has been used for red or purple dye to colour the trousers of the French military a long time ago.

The estate is not big so the winery is of modest size, located in the middle of the Languedoc fields and vineyards. Quinonero uses mainly concrete fermentation tanks for the vinification. Some of the wines also get some aging in oak barrels.

Pierre Quinonero at Domaine de la Garance is a first generation winemaker (his father was a butcher). He started in 1990 and made his first own vintage, with his own bottling, in 1998. Since then he has become one of the established quality wine producers in the Languedoc. He makes a small range of different cuvées: Les Claviers is a white wine made primarily from ugni blanc grapes; Les Armieres that is 90% carignan and a touch of syrah; and Solera that is an experiment in making a sweet wine from grenache and that is, as the name indicates, a blend of different vintages, and perhaps also a reference to Pierre Quinonero’s Spanish roots.