You are here: Home » Blog » Rosé does age. If you want it to. (Bodegas Otero, Castile & Leon, Spain)

Rosé does age. If you want it to. (Bodegas Otero, Castile & Leon, Spain) 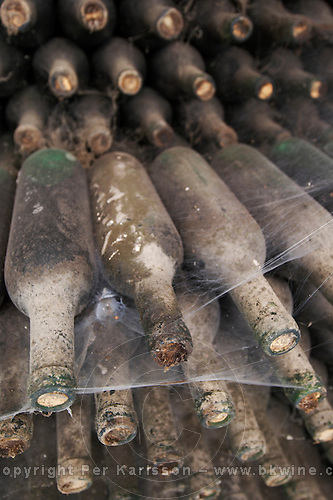 Bodegas Otero, Vinos de la Tierra Valles de Benavente – Bodegas Otero is a hundred year old family wine business in the town of Benavente in the region of Zamora in Castile and Leon (Castilla y Leon) in northern Spain. Amazingly, the family business is still located in the same place as it was in 1911 when don Juan Otero Colino opened a shop selling wine there.

The wine making business of Bodegas Otero really started in 1853 after a new winery had been built. Even the winery is at the same location as 100 years ago. It shows a mix of tradition and modern technology. There are old concrete fermentation tanks as well as more modern temperature controlled stainless steel vats. (A curiosity: there’s an almost antique washing machine!) Some of the wines are aged in oak barrel.

The wines made at Otero are mainly what is called Vino de Calidad (quality wine) from the region of Valles de Benavente. It is located in north western Spain, just on the edge of Portugal. Bodegas Otero makes wine from their own vineyards and from grapes harvested in the vineyards of some 300 independent grape growers. The grape are both of relatively well know varieties and specific autochthonous for the region: prieto picudo, tempranillo, mencia, verdejo, malvasia, garnacha, and even cabernet sauvignon. Bodegas Otero makes a range of different wines. Their main wine labels are Otero Tinto Reserva, Pago de Valleoscuro, El Cubeto, Vina Alegre, Panduco, and Pena Trevinca. Some are made in both red, white and rosé / rosado versions.

← On the border to Portugal, Arribes del Duero (Spain)
What to put in your website footer →