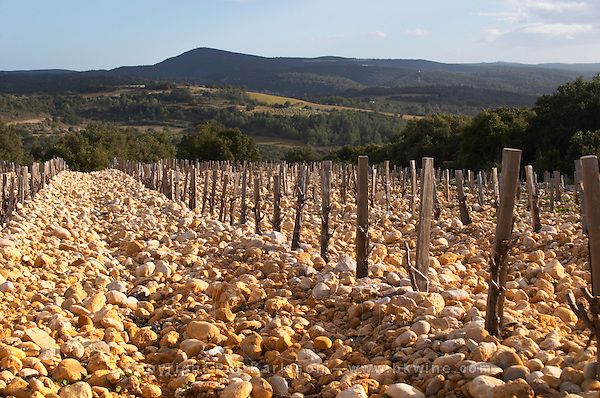 Correction & update: When this picture was taken, in 2007, this vineyard was part of Domaine Montcalems. A few things have happened since (cf. also the text below): Vincent Guizard split from the collaboration with his cousin Frederic Pourtalie in 2010 and created his own winery in Puechabon, called Domaine Saint Sylvestre (http://www.domaine-saint-sylvestre.com/). He took with him the land that was owned by him, including the vineyard on the picture. Which is now, as a consequence, part of Domaine Saint Sylvestre.

Domaine Montcalmès, Puéchabon, Languedoc, France, stock photography samples, by Per Karlsson, BKWine — This is only a selection of samples. Use Image SEARCH to find more photos — Domaine Montcalmes is a small family wine estate in the Puechabon village, close to Aniane, north of Montpellier in the Languedoc region in the south of France. Today it is run by Frederic Pourtalié and his sister Muriel Fabre with the help of their cousin Vincent Guizard. They have built a new, but modest winery in the centre of the village and equipped it with stainless steel fermentation tanks in the front and in the back a barrel cellar for aging some of their wines in oak.

The vineyards of Domaine Montcalmes extend over some 16 hectares. They are planted mainly with red grapes: grenache, syrah and mourvedre. They also have some white grapes: roussanne and marsanne and even some chardonnay. The soil is mainly calcareous. Some parcels are exceptionally stony with boulders sometimes large as skulls. It makes you wonder how anyone can work in such a vineyard and that plants actually can grow there. It is similar to the soil in Chateauneuf du Pape, only more stony. The harvest yields are sometimes ridiculously low, can be as little as 12-15 hl/ha.

Domaine Montcalmes makes a modest range of wines: a red wine called Domaine Montcalmès rouge and a white with just as simple a name. Both wines get extended aging in barrel, 24 months. They use little if any new oak and have a mix of barrique and demi-muids.

This is a young and ambitious winery. It will be very interesting to see its development.